Miniature versions of everyday grocery packaging are all the rage!

I’m a product photographer by day, and a miniature diorama photographer on nights and weekends. I largely photograph grocery store packaging. So when I see tiny versions of the products I handle all day, I’m so hooked. I’m not the only one though it appears. 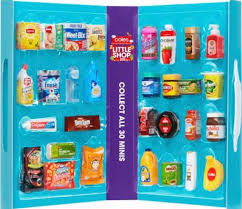 Cole’s, a supermarket chain in Australia, began giving out individually packaged mystery packs to each customer that came through their checkouts for every $30 spent. This was July 2018, and whether or not Cole’s expected or anticipated the massive interest that follows is up for debate, but this promotion blew up! Kids started demanding their parent’s only shop at Cole’s, and collectors jumped heavily on board as well. I would have too if I lived in Australia. The original run of 30 minis is listed in it’s accompanying case as anywhere from $75-300 on ebay.

So Cole’s didn’t stop there and has since released other sets in limited runs from Christmas (5 items), to what seems to be upcoming Easter, Back to School and Kitchen (or maybe that’s just customer wishful thinking) themed sets to be collected 1 by 1 as you buy your groceries.

All you parents of little ones are certainly familiar with Shopkins. Shopkins are little squishy versions of food, kitchen appliances, make up, shoes, etc. Each with a little face and thus personality. Mini Packs puts Shopkins mystery packs inside tiny grocery product packaging – popcorn bags, ice cream tubs, you name it. Unlike Cole’s and the line below, these are cutesy Shopkins inspired packaging, that aren’t branded like a full scale counterpart. They still have adorable tiny barcodes though.

These were released as season 10 in May 2018, and have continued in January 2019’s season 11 release. I myself have quite a few of these waiting for their spot on a shelf. I don’t care for Shopkins personally, but I absolutely adore the tiny packages.

UPDATE: While I was writing this post, it’s been announced that Shopkins will be releasing a line of 50 branded items. This announcement came just in time with the release outlined below. These will be available August 1, 2019 under the name Shopkins Real Littles. Shopkins does have a similar Walmart exclusive, released December 2018 – Shopkins Oh So Real, but it appears the Real Littles packaging will be proportioned a little more realistically, we’ll have to see.

5 Surprise has been around for a bit. Plastic balls with 5 compartments, a surprise toy in each. This month, exclusively at Walmart, Zuru, the 5 Surprise parent company, released Mini Brands. The same mystery 5 pack concept, but with tiny branded grocery packaging inside. This feels a bit like The U.S.’ response to Cole’s Little Shop, but without the free part. There’s also a tiny shopping basket, cart, and store display hidden in some of the mystery compartments.

There are 70 items to collect in the wave 1 release. And I’m hyped. This might be counter-intuitive to my recent sustainable post, but I’m more of a modern consumer than I’d like to admit, and am a sucker for tiny products.
Read a Washington Post article about them here. (Watch the video in the article however, and you’ll quickly notice the woman doing the unboxing is not a miniature enthusiast by any means.)

Thanks for reading! Do you collect any mini things? What are your feelings about tiny branded products?