Just a couple left of these shots. Hopefully taking some more of #damtoys Jadite man this weekend. Maybe some of the glass head too. 🤷‍♀️
@toy.at.heart @toy.at.heart
Today's head shot. Which makes me think they all need to be naturey and outside. Y'all I'm a studio only photog in my day job and at home. Needing these and my #damtoys Jadite man shots all outside is a fully different process for me. But I already have plans to be back at the arboretum this Saturday for a bird walk so may just have to bring some things with me.

My boyfriend and I have been binge watching The Walking Dead on Netflix. We’re on Season 4. He’s seen all the episodes already, so I have a bad habit of asking him questions constantly. For awhile, I kept saying “I want to see someone who is still making art in all of this. Someone who’s hoarding film or collecting plants to make pigments from. Is there ever anyone who does something like that?” Even in The 100 there’s some painting and drawing going on. Eric (my boyfriend) vehemently told me “No.” Well, he lied. Glenn, is later shown taking a picture of Maggie with, from what I can tell, is a Dianna Instant. Did he raid an abandoned Urban Outfitters? Did he have it the whole time and we just never saw it? Maybe he took it from a house… (the internet knows more than me and he apparently got it from his grocery store run, it also seems that the grocery store has plenty of batteries)

In any case, a Polaroid-type camera is probably the most practical for an end of the world scenario. With any modern digital camera, you’re overly reliant on electricity. You’d be okay until your battery died. Maybe you could spend a stint in Woodbury to recharge it, or you could come across an abandoned camera store (not that many of those exist anymore) and collect all their batteries. Then you have the issue of memory cards. I suppose you use one ’til it’s full then switch to another, saving each one in a little pouch, only looking at the images on the camera screen as your battery life allows, hoping for the day you can upload them to a computer or print them once again.

A film camera seems appropriate, but whether a modern film slr or even a large format film camera- the main issue lies in developing the pictures. Sure, once again, you could just save the film as you fill it up (assuming for the film slr you have a slew of batteries) pining for the chance to develop it and never ever seeing the pictures. But, for the full effect you really need to see your creation. So you grab yourself an enlarger, some bins, and whatever chemicals that camera store has left. Which, granted if they even still sold this stuff, it would most definitely still be there because who in their right mind is going to try to carry jugs of chemicals and a huge, heavy, enlarger head around with them? To be fair, I’m sure whoever already had a trailer converted to a darkroom/ giant pinhole camera before the world as we know it ended would still continue to pull it around until they absolutely couldn’t anymore.

While I’m sure I’m skipping a few options, in a round about way, this brings me back to the possibility of Instant cameras like Glenn’s. Pros: The image prints straight from the camera, no looking at it on a screen or finding a stash of photo chemicals, Cons: Still the whole battery thing, and  where on earth are you going to find more film? There’s only like 10 images per film pack. Better use them wisely, or you need to find that Urban Outfitters or maybe the Lomography warehouse. In Glenn’s defense, as far as I can tell, he’s only taken 1 picture which means he’s conserving that film and battery life just fine.

I don’t have an instant camera. Throw me into the Zombie Apocalypse and I’d wind up with my Olympus Tough TG-3, because it’s already in my purse. That also lands me with a 1gb memory card, which is entirely impractical when I’m planning on only saving images on my memory card. And there’s no internet, so that renders the whole, this camera has built in wifi thing useless. Let’s pretend I have my 32gb card and a full battery. With that, I’m going to take the approach of shooting everything I can until I fill up the card or the battery dies, and really really hope to sneak in and out of Woodbury as electricity is needed. Let’s just hope there’s a weak point somewhere, an outlet no one’s using and I don’t run into the governor.

Now onto the important stuff. What pictures would I take?

If I managed to take some minis with me (because of course when there are zombies everywhere I turn to my miniature collection), I’d have grabbed my zombie and maybe my farmer or one of my photographers- because they’re my favorites, and yet, also oddly fitting. I could no longer be the, practically only in the studio photographer that I currently am, but I could still place some representational figurines about- when things are calm of course. 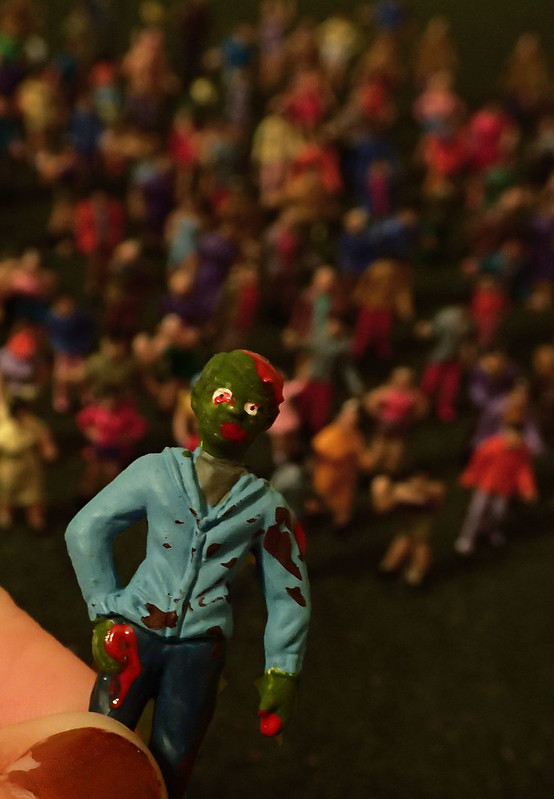 {look at you, you’re just like all those other boogers…except, you won’t eat me} 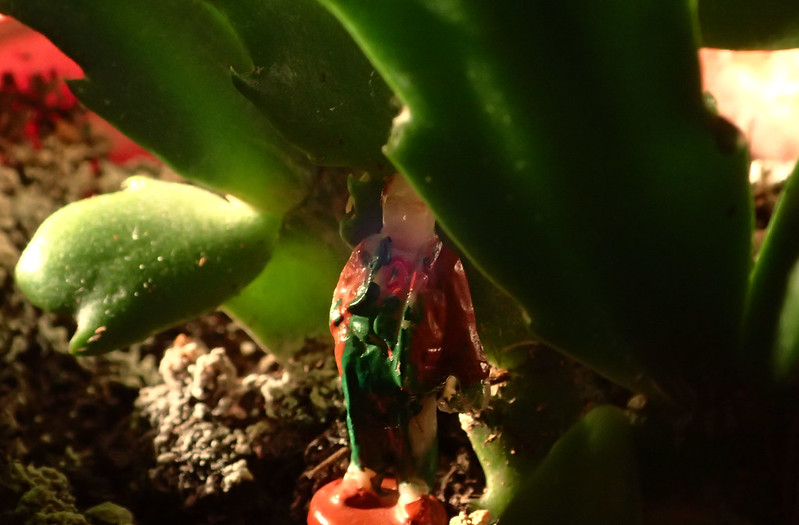 {maybe you can bring me good luck with growing some crops}

{Looks like this is where we’ll be staying for awhile. Gotta seal up these windows.}

Depending on how crazy I was feeling, I may throw caution to the wind a time or two and snap a photo of a zombie on top of me trying to eat my face, just before I stab it in the head. Gotta capture the fear of the era somehow. 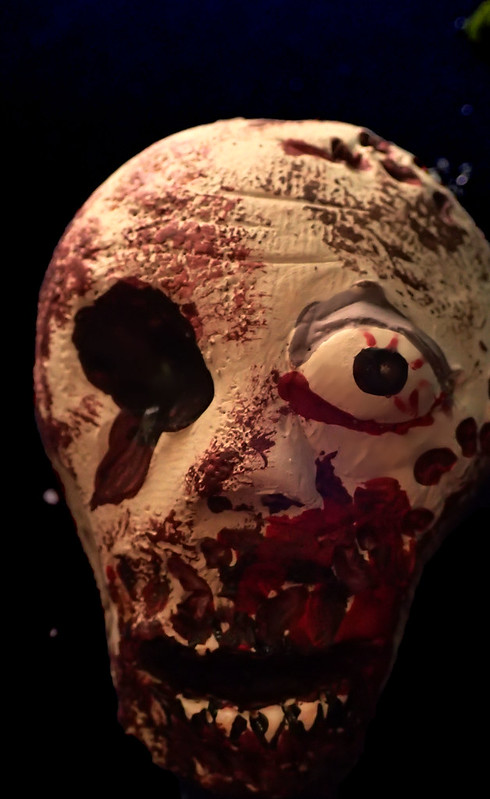 I’d of course have to snap a couple photos of my loved ones. You know, for those times you need some strength or hope, or to preserve their memory in case of their demise. Do you think a cat would hold its own against some zombies? Let’s pretend Wolfgang (my cat) would make it. Oh, and Daisy (my bird) would be just fine too.

{Apocalypse selfie – skinny and worn out because of this mess, but smiling because we still have each other – and it’s a picture, so we have to…} 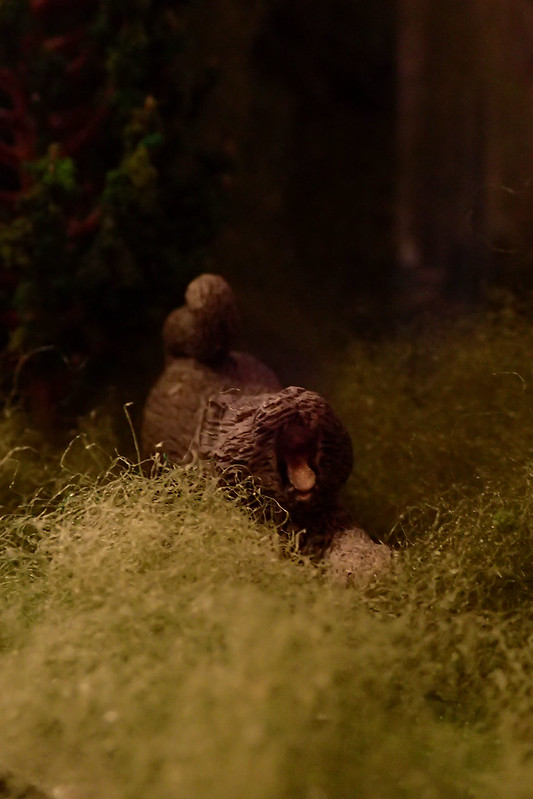 {At least someone’s managing to sleep.}

{Daisy. We all seem to have blood on our faces these days.}

If I were in Glenn’s position, and my group lowered me into a well to attach a rope to a bloated zombie, before I came to my senses, I would totally take a picture of that ugly thing.

While I’m all about those abandoned building pictures now, they’d probably lose their magic in light of everything being abandoned. So, I suppose that’s one thing I wouldn’t take a picture of in a zombie apocalypse, at least not after the first few weeks of it.

I would, however, set something on fire just to watch it burn. I can imagine doing plenty of questionable things, just because I could- not anything that would hurt someone though.

{Ha. Bout time someone burnt that thing down.}

Long story short, I just can’t believe that even when the world goes to crap, there aren’t some people who retain that drive to create.

Would you continue your art, or other profession during the zombie apocalypse? How and why?

“A bowman. I respect that. See a man with a rifle, he could have been some kind of photographer or a soccer coach back in the day. But a bowman’s a bowman through and through.”- Joe, The Walking Dead, Season 4 Episode 13, Alone