Photo fakery, at its core is probably something you’re very familiar with. Think magazine covers with heavily photoshopped models, or more closely related to this blog, cinematic film sets made entirely of intricate miniature models (see ‘further reading’ below). But for 100 years, if not more, people have been using small objects within photographs for large-scale results. And no matter the desired goal, this has been done in part to trick the viewer into believing the photo before them is of the full scale, real world.

Photography’s roots lie in truth. While in modern times we recognize photos are easily, and quite often, manipulated, photos still tend to be considered representative of what was in front of the camera lens, and therefore, a more believable medium than say painting.

While photo fakery ranges from merging photos, deleting and adding details through dark room or digital techniques, and using photos in unintended ways – such as with misleading news-like captions, for the purposes of this post, I’m only going to discuss those which involve toys or similar small-scale objects.

Photographs involving realistic depictions of toys haven’t always been so manipulative however. David Levinthal who began photographing toys in 1972, has always been upfront about his subject matter. Yet many of his images, most notably those of war, successfully blur the line between plastic toy and real world.

Referring to herself as a faux landscape photographer, Lori Nix is known best for her still photos of small scale post apocalyptic worlds.

Michael Paul Smith, a diverse model maker, takes his cars outdoors to photograph in the real world with forced perspective. While he’s received online media attention quite recently, he’s been photographing toys for over 25 years.

In modern day, there are plenty of us who create images with this goal in mind. But there are a few I’d like to mention who are truly succeeding in making this phenomenal form of art that are not always known in the toy photography community.

In 2000, Mark Hogancamp started taking photos of war figures as a form of art therapy. Many of his images appear so realistic, one was even shared across facebook as a depiction of ‘real American courage.’

Matthew Albanese began creating insanely real scale model photography in 2008. In his outdoor landscape photos, every details is scrutinized over before the photo is created. 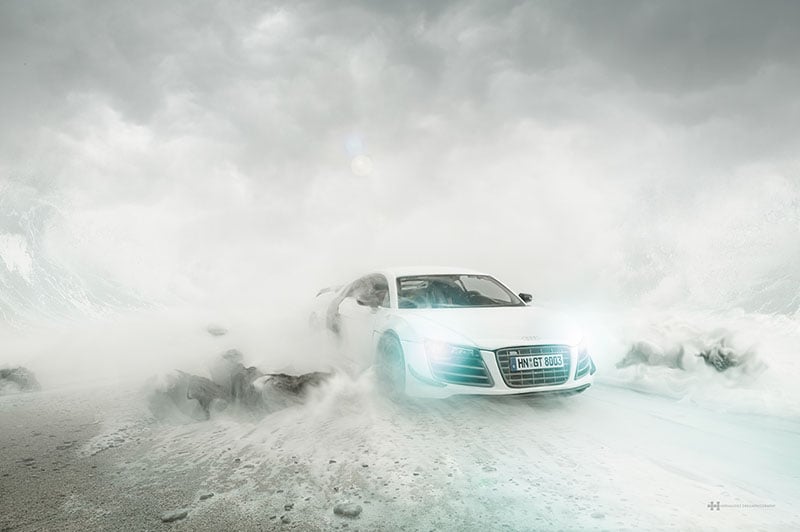 Felix Hernandez Rodriguez, most widely recognized as of late for his work with Audi, has a keen eye for detail, atmosphere and light and uses it to make some very believable shots.

And that’s where I’ll leave you today.