“There is less in my photographs than meets the eye. I look at my work as a narrative that taps into each individuals own memory.”

David Levinthal just turned 70, which makes it 40 years since his first NY gallery show and 53 years since he began his exploration of photography.

The Smithsonian American Art Museum in Washington D.C. now owns 545 of David Levinthal’s photographs, 8- of which are currently on view in ‘American Myth & Memory.’ Pieces from his journals can also be found in the Archives of American Art (papers can be seen by appointment only).

Levinthal creates composed worlds. His images both perpetuate and explore American stereotypes. He tells stories through small details, rather than through expansive, detailed spaces. This allows the viewer to bring their own visual memory to the photograph before them.

His work can be compared to film stills. The images are the moment in between an imagined before and after.

“Toys are so much a product of the time and culture that they came from.”

Like most of us, he loved toys as a child. He however, never lost the will to imagine worlds for those toys. His interest in photography came a bit later. He started at Stanford in 1966 with the goal of becoming a constitutional lawyer. Shortly after, he discovered photography through the nearby Free University. With no photography program at Stanford, he sought out his own education.

He attended Ruth Bernhard’s School of Photography, which she ran out of her home, while finishing his degree at Stanford. He then completed a graduate program in photography at Yale. Here he studied under Walker Evans.

It was also at Yale that Levinthal began using toys in his work. He was on winter break and photographed toy soldiers on his bedroom floor. While his peers didn’t immediately understand what he was doing – toys had never been such the sole focus of photography before – a teaching aid however loved his work and encouraged him to keep exploring this path. 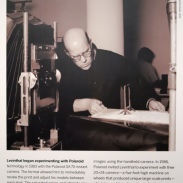 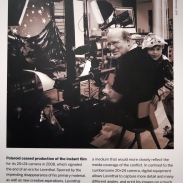 ” My work is about a West that never was, but always will be.”

Shortly after graduation Levinthal was commissioned to create a historical book with graphic art student Garry Trudeau (who became the first person to win a Pulitzer prize for a comic strip during the time of this book creation). The two created ‘Hitler Moves East,’ published in 1977. This became Levinthal’s first major series of work.

Levinthal exhibited in the show ‘In Plato’s Cave’ at the NY Marlborough Gallery at the age of 30. Among those exhibited were Ellen Brooks and Laurie Simmons (fellow photographers dabbling in toys), along with other emerging artists of the Pictorialist period. Photography had traditionally been black and white, but Levinthal had been experimenting off and on with color ( hand coloring black and white photographs and developing color 8×10 prints in the darkroom), but hadn’t moved fully into this way of working. In this show, Brooks had color photographs of miniature figures on display, after discussing these with her, Levinthal decided to move fully forward into color.

From 35mm black and white film, not into Polaroid. First he would use his Polaroid camera with a clip on macro lens. Then as video cameras with good magnification capabilities were released, he’d point the video camera at his diorama, have it hooked up to the TV, then photograph the TV screen with his Polaroid camera.

After forging a connection with the Polaroid company through a mutual friend, he began to get film shipped to him regularly, got a show at the Polaroid sponsored Cambridge Gallery, and got sponsored studio time with the large format 20″x24″ Polaroid camera. Unfortunately, when Polaroid shut down, so did the studio, so after 30 years with Polaroid, Levinthal went digital.

Levinthal’s first retrospective was at the International Center of Photography in 1999, some 30 odd years after be began working with toy photography. And here we are, another 20 years later. But don’t worry, there have been countless shows and retrospectives in between.

I began my own toy photography path at 17, about 3 years after I began exploring the medium of photography. At 19, with encouragement from a supportive undergrad professor, there was no turning back, and all my work following has focused on toys. It was this same year that I learned of David Levinthal, and in my years since college I’ve researched him and the other toy photographers emerging in the 1970s and developed a huge respect for their work in the medium. Being able to see Levinthal’s work in person, and briefly meet his after was so wonderful and as I continue forming my thoughts around his words, I hope learning from him can help inform the way I speak about my own work.

‘American Myth & Memory’ is on view at SAAM through October 14.

Photographer of miniatures and writer on all things small. View more posts