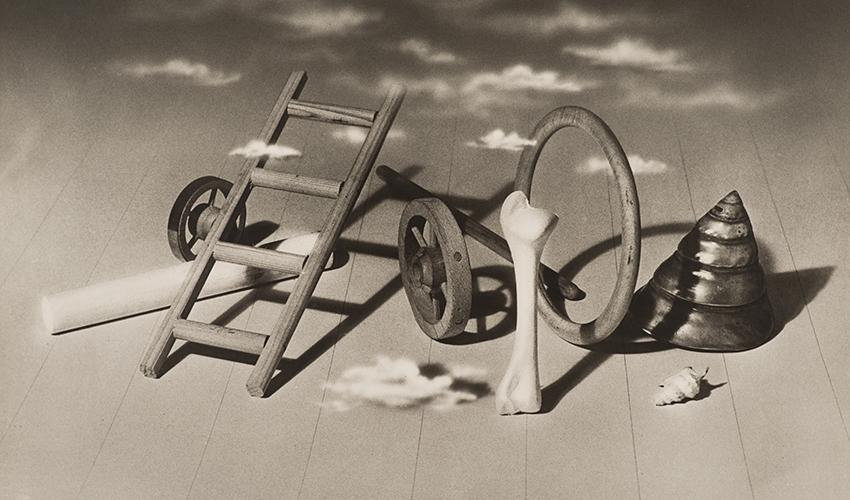 While toy photography is a genre all its own, toys and miniatures in an of themselves are iconographic objects. This has led photographers who don’t always or often use toys in their work, to occasionally pull from the iconography of these objects.

Maholy-Nagy believed art could lead to social transformation. From painting, to photograms, to photography in his time teaching at the Bauhaus school of art in Weimar and Dessau 1923-1928. In this time he “embraced his “new vision,” a means of expressive power through photographs taken from unconventional perspectives” (László Moholy-Nagy, Guggenhiem).

Bayer was also a member of the Bahaus movement, and a strong proponent of all art forms. From architecture, to mural painting, to creating the universal alphabet, a font then used for the Bahaus movement. He came to making photos in 1928 when he left Bahaus, but he brought much of his ideas with him into his new personal and commercial work. (Herbert Bayer, MOMA)

List began as a hobby photographer. He left Germany and worked in Paris and London in 1936, at first in fashion photographyfashion photography then moving into doing his own studio surrealist still lives of which he referred to as the Fotografia Metafisica style. (Herbert List, Magnum Photos)

“He was fascinated by the relationship between perception and the subconscious, and between sexuality and imagination.” One of the only Dutch artists to make surreal work, von Maerkerken often spent time in Paris photographing, visiting exhibitions and participating in the surrealist movement alive there. (Retrospective of the Work of Emiel van Moerkerken at The Hague Museum of Photography, ArtNet)

Even modern day toy photography, especially when we move away from pop culture work, has a strong place in surrealism. Representing people in plastic figures, or representing emotion through carefully framed and lit trinkets is very much not straight-forward realism, it’s instead a deep dive into the feelings and connections of the “unconscious mind” something the artists above sought to explore.

Buy me a coffee!

4 Replies to “Historic Dabbling in the World of Toys – Bahaus, Fotografia Metafisica, Surreal”