Vogue is a popular fashion magazine. They’ve been around since 1892 and are still going strong. And through them we can draw an easy line from fashion photography to interior design photography to still lives and within, miniature photography.

“Beauty is so subjective, it’s anything that moves me and I think those things are especially moving if I cant explain why. Enjoying a sunset for example is a bizarre pleasure that only humans seem to appreciate and that makes it so mysterious and so intellectual.” 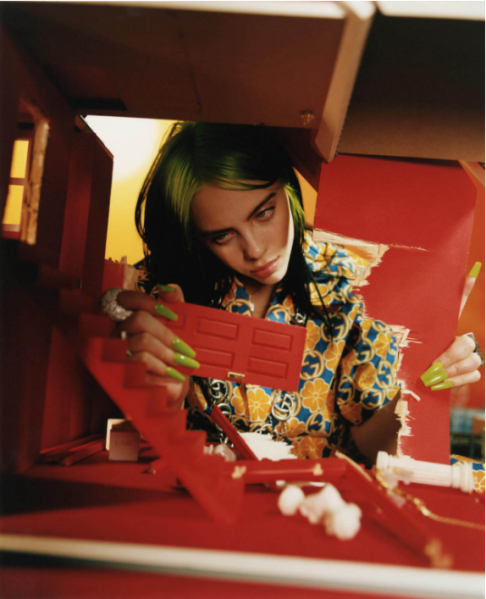 Harley Weir, a fashion photographer who broke into the scene in 2013, and first shot for Vogue Italia in 2017, photograohed her first Vogue American cover March of this year. In these images she photographed Billie Eilish with miniatures.

The article that surrounds these images, among others, discusses “Billie’s World,” her rule breaking stereotype, of which she says you can’t be a rule breaker if you didn’t know there were rules to break, and her music’s influence over teens struggling with depression.

These following image analysis is conjecture on my part, but well influenced. Harley’s image of Billie, with her finger lightly reaching toward the miniature figure (in her signature green color) is titled Take Care, and signifies Billie’s relationship with her struggling fans and the amount of pressure involved with becoming a lifeline to so many people. The miniature city scape, with a Billie Eilish billboard, titled Soft Power, is literally the world beneath Billie’s feet, her rise to fame exemplified. Then the broken dollhouse, seen in two images. She’s broken the house, and the art within. She’s breaking the rules of the artistic field she’s within.

All this to say, Harley Weir chose miniatures because of their iconography. Miniatures are small versions of their full scale counterparts and thus completely representative of. Placing a full size person within a miniature scene, in the ways in which Harley Weir has here, is the perfect way to symbolize control.

I’ve known about these images since soon after the release of this issue of Vogue. I wanted to do something here on the blog with them but hadn’t quite figured out how. Then I came across two Vogue photographers in my recents posts, and everything came together.

“I don’t think photography has anything remotely to do with the brain. It has to do with eye appeal.” 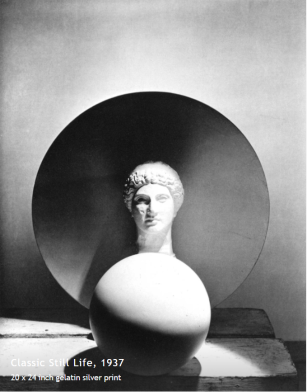 Horst, as you may remember, if you read my Surrealist Figure Photographers of the Mid 1900s post, became a photographer for Vogue in 1931. One of his images for Vogue is still highly recognizeable and was used as inspiration in a Madonna music video. And while he never used miniature figures in his fashion images, he did in his interior/still life work.

Going back even further, de Meyer became the fist full time photographer for Vogue in 1914. He later went to work for Harpar’s Bazaar in 1921. His work is said to have revolutionized fashion photography, of which he was also the founder.

So after knowing of these three, from such different periods in history, I had to look into other Vogue photographers. I would say fashion photographers at large, but that’s much too big of a pool to pull from. And well, within their portfolios I didn’t find any toy photography, but I did find still lives. 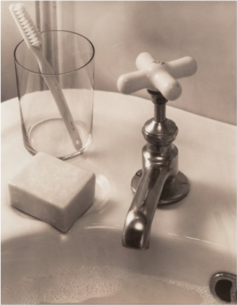 Steichen photographed for vogue in the 1930s and is said to have made the template for modern day fashion photography. 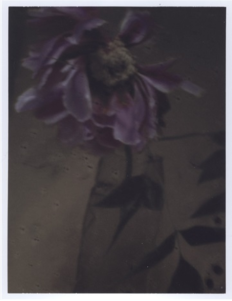 Moon was a photographer for Vogue in the 1970s. Her work was bright, colorful and even edging on abstract. Her still lives however, with a similar blur style, were darker, more muted, and came largely to life after she parted ways from the fashion industry.

It ties together so easily. Interior design is the fashion of the home, the office, whatever interior space. And within those spaces we set up still lives all the time. The lamp on the table next to the stack of books and the souvenir from vacation. As a photographer of spaces and the lives of people within them, it only makes sense that sometimes the details would also be captured. But within those details spawned something else for Horst and de Meyer, they were inspired to tell small bits of stories with small things. And in a similar vein Harley Weir, brought that same influence into her fashion work, wrapping together fashion with miniscule still life.

Photographer of miniatures and writer on all things small. View more posts