🌱🌿
New picture, new blog. Posting blogs pretty much daily these days so check em out. Link in bio.
It is way too hot out and my glass head now has dog slobber all over it, but I got some new pictures! 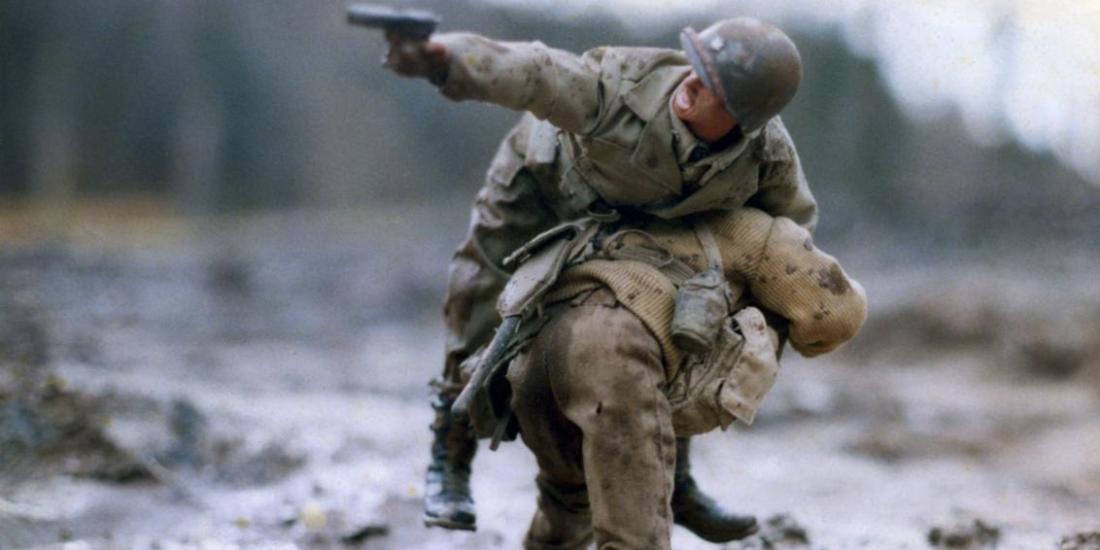 I really really wanted to like this movie. I wanted to be able to write an unpopular opinion post, stating all the good in the movie that reviewers are overlooking, and trust me I’ve read the reviews looking for a similar take to what I had hoped to write. But sadly, that imagined post is not what this is going to be. I had hoped, being a toy photographer myself, and finding the story of Mark Hogancamp very intriguing, I’d see the movie through a different lens, and maybe I did, but that lens was cloudy all the same.

Spoilers for both the Marwencol documentary and Welcome to Marwen ahead.

For those of you who don’t know, Mark Hogancamp is a hate crime survivor. He made mention at a bar that he likes wearing women’s shoes, and in return got jumped from behind by 5 guys. They beat him nearly to death. He was in a coma for 9 days. When he awoke he had no memory of his prior life. He had to relearn to write, speak and walk. His state funding for medical care ran out after a short time, and he turned to a miniature world for his own version of therapy. His hands were too shaky for smaller scale models, so at the suggestion of the local hobby shop owners, he settled on 1:6 (Barbie) scale and created the fake Belgian town of Marwencol, set within WWII. Previously an alcoholic, he never drank again after the attack. I say this as a precursor, but yes, his views on women are odd. He adores them, but almost from a distance. They are different than people, better, held on a pedestal, and yet more empty. I could chalk this up to simply poor social skills relearned after the coma, but who really knows.

A man with an interest in women’s shoes, a non-remembered past, PTSD, Nazis, strange views on women, and art as therapy, and you have an incredibly interesting documentary. Add up the same, add in CGI animation, a more forward main character, and an opioid addiction, and you have a very strange plot for a feature film.

So, let’s start from the beginning. Today I went to Regal theater down the road on my own. I’m loyal to Regal because they got me to sign up for a rewards card at the mall in middle school, and for some reason that makes me like them. I went on my own because no one else wanted to go. I could have easily dragged my boyfriend along this evening, but I decided to spare him and have popcorn for lunch while he was at work.

The man at the ticket counter had to have me repeat the name of the movie.

I got into the theater at 1:17, 7 minutes past showtime. The previews were rolling and I was the only one in the room. The movie started at 1:29 and it was still just me.

Contrary to what you’ll read, Hoagie, the CGI/action figure Steve Carell, does not climb out of his crash landed plane in heels. His military issued boots burn off, he finds a woman’s luggage and thus her patent leather heels and places them on his bare feet. Practical.

You’ll also read about terrible animation, but I personally think it worked. They’re plactic GI Joes, Barbies and the like, made to look like their voice actors. Some reviewers found it creepy, I honestly think it was well done.

An employee walked in a few minutes after the movie began and I thought for a moment I’d have company, but alas, my private viewing continued.

One thing is for sure, I can completely relate to having trouble getting plastic figures to stay standing.

There are some immaculately built miniatures in this movie. The bar in itself would have cost thousands upon thousands of dollars, custom 1:6 scale figures with articulation are expensive enough. Real life Mark makes all of his scenery with plywood and the like.

Also, Nicol and her douchy ex do not exist in real life. Nicol works as a stand in for other woman in Mark’s real life, however I thought Kurt was pretty unnecessary as a dramatic plot point, as Mark already has plenty to overcome without an angry man occasionally popping in across the street and speaking in German at him.

Welcome to Marwen also fails to mention Mark’s mom, but it does include a Russian care taker, that I assume is filling that role.

Okay, so enough about the differences for the moment. My main concern with these is whether or not I would have known what was going on, had I not been familiar with the documentary to fill in the gaps. And while yes, I could have watched and followed the movie, I would have been even more confused as to why Mark and the dolls of Marwen were the way they were. The dialogue is so stunted. Mark is a broken character that I have so much sympathy for one second, and a chipper almost condescending one the next. While I don’t think they meant him as condescending, the tone of voice in which he says “Cool! Espadrille wedges. Thank you.” bothered me so much. And yet, when he’s experiencing PTSD in the hobby shop I wanted to cry for him. Steve Carell did speak with the real Mark Hogancamp as to how his disabilities effect his movement and such, but I didn’t actually get the vibe that Carell was trying to be a similar character to Mark, more his own version of someone in this situation.

So anyway, then come the jokes about tiets and sausages surrounding the story of the milk maid Hoagie rescued. The milk maid dies about 5 seconds later and thus was only there for these jokes that don’t even land. Granted I only have my own sense of humor to weigh these against, but they were, in my opinion, just super cringy.

Side note, if you don’t want to be visited by a creepy witch while you sleep, don’t put her next to your bed. Symbolism I know, but come on. If you haven’t seen the movie and that makes no sense, Deja, the witch of Marwen is a symbol for Mark’s addiction. Her hair and glove are the same color as his pills, she tells him she is the only thing that understands him. We later learn that Deja is also a Nazi spy and she is banned from Marwen. So she also seems to symbolize Mark learning to recover from his PTSD, because without Deja the Nazis stop coming back to life. Mark does not have an addiction in real life, but Deja is one of his dolls, and she is jealous. Hoagie marries her, and ends up with 2 wives, to keep the peace of Marwencol.

By 2:06 I was bored. And just after, the Barbie stand in for the hobby shop owner that has a crush on Mark gets her shirt ripped open by the Nazis. Yay doll boobs. At 2:10 the employee came back through.

Mark inevitably shows off his shoe collection to his new neighbor Nicol. Her character is odd. Again, I imagine we know her only through Mark, and thus her existence seems empty. Shes an overtly female stereotype with heels, sundresses and a teapot collection, and she gets much too distressed about a minor amount of fake blood. Mark tells her that he does not have a shoe fetish, but that he is collecting women’s essences. And I have nothing against shoe fetishes if that’s your thing, but I sure have something against the phrase “collecting women’s essence.”

At 2:50, just after Mark proposes to Nicol (so cringe, please stop), an old couple snuck in. Like I get the whole movie hopping thing, but what are you hoping to get from a movie an hour and a half after it’s started?

More doll boob humor. But I must admit, I thought Hoagie’s head spinning all the way around in the church, and then the SS soldier taking off his arm in the next scene to reach his gun were kinda funny.

The old couple left at 3:08. They only lasted 28 minutes. The teenagers stayed until the end.

Roberta, the hobby shop owner is not a person in Mark’s real life. Instead, his local hobby shop is run by a nice old couple. Roberta however, was a refreshing woman in the movie. She is real and sympathetic and not so empty like the other featured women. She clearly has a thing for Mark, and we have some hope at the end of the movie that maybe they’ll get together. At the same time Mark also gives us hope that he’s learning to separate his real life from his imagined world, as he showed us wasn’t so separate earlier in the movie.

The documentary also gives a similar hope in the final scene of Mark at his gallery show, as he has the bravery to put on his shoes of choice. Mark in Welcome to Marwen is less shy altogether about his shoes, so they had to offer him another type of growth moment.

While we aren’t told what the sentences for Mark’s attackers, seemingly Nazis, but not so in real life, are in Welcome to Marwen, I’ve read only 3 of the 5 got prison time – 1 with 9 years and 2 with 5 years each. By the time the documentary was filmed in 2010, 10 years after the attack, all the men are out of prison and out and about in the same town with Mark.

With the violent animation, PG-13 rating, dolls in lingerie/ sexual attraction to dolls, and multiple uses of boob and penis jokes, I’ve come to the conclusion that this movie was never intended for families or children. That’s all well and good, but honestly it only seems that a few select instagram toy brotographers would laugh at the oddly placed jokes and what a niche group that is to make a movie for.

This and the documentary of the same story are intimate looks at the inner workings of a broken man. And I give the film makers credit for taking on such a task. So overall, sure, still see the movie. But, go into it to see what a stunning confusing mess it is, not to learn about Mark Hogancamp’s true, inspiring story. You can instead rent the documentary on itunes here.

What a weird movie.

Have you seen either Welcome to Marwen or Marwencol? What are your thoughts?